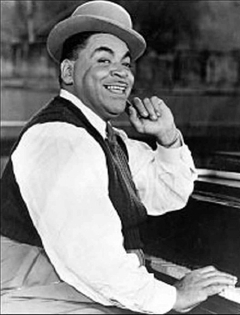 The following is a précis taken from the sleeve notes of The Real Fats Waller Camden CDN-131 which is in my vinyl collection:
Thomas (Fats) Waller was an American jazz pianist and composer. It is generally assumed that he wrote more than 450 tunes, many of them unpublished and many with themes or phrases duplicated in his other compositions. Some of his earliest works were adaptations of existing folk tunes, blues or ditties. His grandfather, Adolf, had been all over the South as a pianist, and his mother, Adeline Locket Waller, sang and played both the piano and organ. His father was pastor of a Harlem Baptist church resultantly his musical education was divide between classics and church requirements.
He wrote his first rag at fifteen and from then on managed to compose a huge number of songs, the music for three Broadway shows and to make nearly 500 records in just twenty years. Through out the 1930s and early 1940s Fats was a star of radio and night-clubs, and toured Europe. He unexpectedly died on board a train near Kansas City, Missouri of pneumonia in 1943, no doubt in consequence of his legendary appetite for life and burning the candle at both ends.