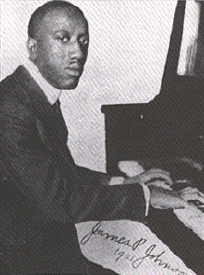 According to the Internet source given below, James Price Johnson was an American composer and pianist. Born in New Brunswick, New Jersey, he was taught by his mother studying classics and ragtime and was apprenticed to one Bruto Giannini, local piano teacher, at the age of nine. At just thirteen he began playing professionally in sporting houses progressing to rent parties, bars, and vaudeville. When World War I started he had a small band with which went touring and eventually toured England and Europe with two shows, "Dudley's Smart Set" and "Plantation Days".
An important transitional figure between ragtime and jazz piano styles along with such musicians as Ferdinand Morton, Art Tatum and Thomas Waller. His style evolving from rags, stomps, and set dances became known as Harlem Stride or Shout Piano earning him the sobriquet as being the father of both.The composer of the jazz classic Charleston, he had a huge influence amongst his contemporaries such as Fats Waller, Count Basie, Art Tatum George Gershwin, Duke Ellington and Thelonious Monk. All of them called him simply James considering him to be the best of them all.

This list is arranged in chronological order and contains 60 works by James Price Johnson (1894-1955). It does not claim to be complete and represents only the number of items located. Keys: ER