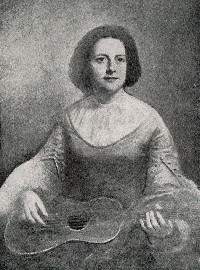 According to the Internet source given below, Abby Hutchinson Patton was an American composer, singer and poet born in Milford, New Hampshire
Born into a family with a long musical ancestry, she learned to sing as a four-year old at her mother's side. Her first public appearance was in Milford together with her parents and 12 siblings. Together with her three younger brothers, Judson, John and Asa they began their concert career as The Hutchinson Family in 1841. After achieving fame in New York in 1843 they left for a year long tour of England charming many public figures such as Charles Dickens and Lord Alfred Tennyson.
After her marriage in 1861 she sang with her brothers only on special occasions. She was interested in and supported women's education and universal suffrage. After her husband's retirement in 1873 they traveled to Europe, Asia, Africa and all parts of the USA.
She died in Milford, New Hampshire.