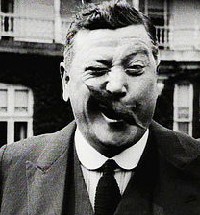 According to the Internet source given below, Ronald Macdonald Hutchison, professionally known as Harry Tate, was an English comedian Born in Lambeth. He performed in smoking concerts, music halls, in variety shows and in films.
He had sung at an evening concert for Henry Tate & Sons, the sugar refiners, so that at Marie Lloyd's sugestion, he took his stage name from his employers. He made his London debut in 1895 at the The Oxford Music Hall mimicking other music hall performers such as Dan Leno.
After success with his sketch Motoring (1902) he concentrated on sketches, most of which he wrote with Wal Pink. He toured with a six-performer company appearing in West End revues. He also appeared in four Royal Variety Performances, in 1912, 1919, 1925, and 1938.
He died in London following a stroke.