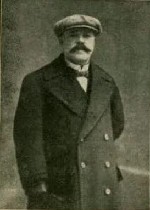 According to the Internet source given below, FV St Clair was a music hall performer and song-writer of some 100 plus songs.
Most of his songs were topical, martial and nationalistic extolling the virtues of the British Empire. Of interest is his Follow the Drum (1914) published by E. Marks, London, England the front cover of which shows his portrait given on the left.