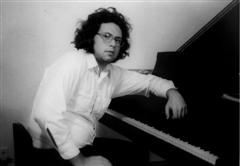 According to the Internet source given below, is an American composer and musician born in Moss Point, Mississippi, United States known primarily as a modern ragtime composer. He is also a primitivist style painter.
His first recording, Music For a Pretty Baby, appeared in 1978. Pieces such as The Early Life of Larry Hoffer (1977), Roberto Clemente (1979), Pinelands Memoir (1995), Through the Bottomlands (1980)", and the suite, New Orleans Streets (?) have caused Roberts to be considered one of the leading contemporary ragtime-based composers. The New Orleans historian Al Rose called him "the most important composer of this half of the century in America."
Roberts coined the term Terra Verde (green earth) as a label for compositions which can not be considered as conventional ragtime, mostly by contemporary ragtime writers such as himself, Frank French, Scott Kirby, Hal Isbitz and others.

This list is arranged in chronological order and contains 44 works by David Thomas Roberts (1955-). It does not claim to be complete and represents only the number of items located.