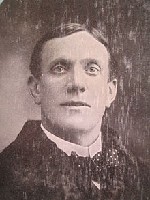 According to the Internet source given below, Harry [Thomas William] Randall was an English comic actor in music halls and pantomime born in High Holborn in London .
He started his career an amateur aged 11 at the Princess's Theatre, London. and made his first professional music hall appearance in 1883 at Deacon's Music Hall, Islington. He became a popular pantomime dame by the 1890's.
Together with Dan Leno, Herbert Campbell and Fred Williams, he formed a theatre management company, operating and building several theatres, including the Grand Theatre, Clapham.
His first appearance with Leno and Campbell at the Theatre Royal, Drury Lane was in 1903. He played dame roles at Drury Lane and performed in music halls until 1913.
He died in Hendon, North London.