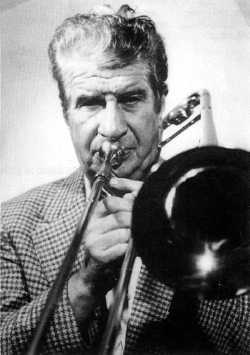 According to the Internet source given below, Melvin Edward Alton "Turk" Murphy was an American composer of jazz music, trombonist and bandleader who played traditional and Dixieland jazz.. After serving in the Navy during World War II, in 1952, he headed Turk Murphy's Jazz Band, which included pianist Wally Rose, clarinetist Bob Helm, banjoist Dick Lammi, and tubaist Bob Short.
Personal remarks:
My interest in Turk Murphy stems from an EP in my possesion on which his band performs New Orleans Blues by Ferdinand Morton that became a great favourite on mine.