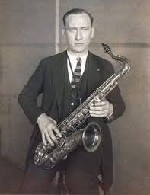 According to the Internet source given below, Isham Edgar Jones was an American bandleader, saxophonist, bassist and songwriter born in Coalton, Ohio.
He composed the tune We're In The Army Now (1917 as the United States entered World War I. And became popular again during World War II being played by the U.S. Army Band.
His band, The Isham Jones' Orchestra was one of the most popular dance bands in the 1920s and 1930s. He performed at the Fred Mann's Rainbo Gardens and Green Mill Gardens in Chicago before moving to New York City. He also toured England with his orchestra in 1925.
His band recorded on the Brunswick, Victor, Decca and ARC labels. He retired after leaving Decca in 1936.
Of ragtime interest is Virginia Rag (1913) published by Jones Brothers, Saginaw, Missourt, USA.
He died Hollywood, Florida.