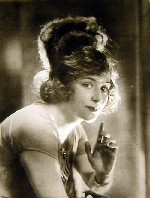 Born in New York into a vaudeville family, Irene Franklin toured from a very early age becoming a star by the age of 16. She was variously a song-writer, impressionist and comedienne in vaudeville, a Broadway performer and Hollywood film actress. Starting in 1911 she made a number of recordings. She met Burt Green whilst performing at Tony Astor's in New York; the pair married and became a successful singer/pianist duo on Broadway as well as writing songs together. When Green died, she then teamed up with pianist Jerry Jarnegin who she also married. Of ragtime interest is Red Head Rag (1910), co-composed with Green and which was her signature tune. She died in New York.