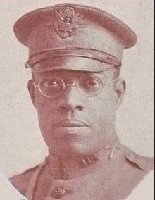 According to the Internet source given below, James Reese Europe was an American bandleader, arranger, composer who had a huge impact on the development of jazz from its ragtime roots. The son of a former slave he was born in Mobile, Alabama both his parents being musicians. His family moved to Washington, D.C. in the early 1890's living quite close to John Philip Sousa. Here he studied violin with Enrico Hurlei, the assistant director of the Marine Corps Band. Europe settled in New York City in 1904, where he directing musical comedies with Joe Jordan and others. In 1910, he played a dominant part it setting up the legendary Clef Club, a union of African-American musicians, becoming its musical director and president. Together with Ford T. Dabney he became involved with Vernon and Irene Castle, the most prominent dancers of the day, eventually becoming their bandleader.
During the Great War, Europe joined the 15th New York Infantry as a private but quickly rose to the officer ranks and was given the task of organising a military band. The resulting 369th Infantry Regiment band, the "Hell Fighters", was legendary and is credited with having introduced jazz to France. His bandsmanship was not his only mark in history; he also has the distinction of being the first Afro-American officer to lead his troops into action. After his successes in the European theatre, he and his band returned triumphantly to New York to tour American cities. His career was tragically cut short on being murdered by his drummer in Boston during a concert. He was buried with military honours at Arlington National Cemetery. Eubie Blake was later quoted as saying "He was our benefactor and inspiration. Even more, he was the Martin Luther King of music."

This list is arranged in chronological order and contains 49 works by James Reese Europe (1881-1919). It does not claim to be complete and represents only the number of items located. Keys: ER