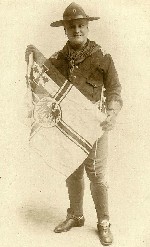 According to the Internet source given below, George Dryden Wheeler Sr. stage-named Leo Dryden, was an English music hall singer, songwriter and vocal comic born in London.
Best known for his patriotic and colonial songs ne was advertised as the "Kipling of the Halls". One his successful songs was The Miner's Dream of Home (1891) which he composed with words by Will Godwin and published by Francis, Day & Hunter. It can also be found in 60 Old-Time Variety Songs.
He died in London.