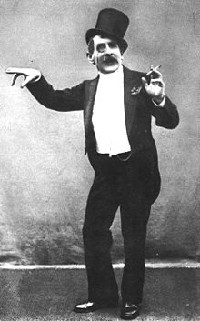 According to the Internet source given below, Colin Whitton McCallum, stage name Charles Coborn, was an English music hall singer, songwriter and comedian born in Stepney, East London.
He debuted on the Isle of Dogs in 1872 and was later billed at The Oxford Music Hall in London as "The Comic of the Day". He heard My Nellie's Blue Eyes (1876) by the American William J. Scanlan and rewrote it as Two Lovely Black Eyes (1886). This was a success and it became his signature song performing it regularly wearing a faded frock coat, carrying a battered umbrella and with two blackened eyes. Another success was "The Man Who Broke the Bank at Monte Carlo (1891) by Fred Gilbert - both songs are given in 60 Old-Time Variety Songs.
The latter became a staple of his act performing it on tour in different languages throughout the world.. Coborn later estimated that he had performed the song 250,000 times in the course of his career singing it in 14 languages. His I've Never Turned Money Away was controversial
He did charitable work in the First World War and later made efforts improving the conditions of music hall entertainers.
He died in London.