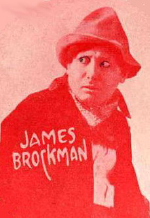 According to the Internet source given below, James Brockman was an American songwriter and in his early years, a stage comedian. He studied music at the Cleveland conservatory. His most endurable success must be I'm Forever Blowing Bubbles (1918) which was introduced by June Caprice in the The Passing Show. Other hits include Down Among The Sheltering Palms, Feather Your Nest (1920) and I Faw Down An' Go Boom. (1928). Towards the end of his long and successful career he wrote film scores. Of ragtime interest is his Chicken Rag (1911).
His portrait on the left is taken from Wop, Wop, Wop! (1908) published by M. Witmark and Sons, New York, Chicago, San Francisco, USA.