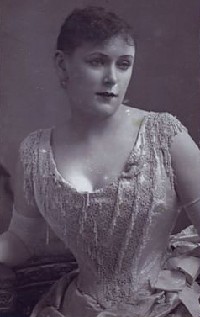 According to the Internet source given below, Bessie Bellwood (née Catherine Mahoney) was an English popular music hall performer Bellwood born in London.
She took the stage name Bessie Bellwood in 1876 making her music hall debut in Bermondsey, London.
Noted for her singing of 'Coster' songs, including her own What Cheer Ria (1884 - words William Herbert), she became popular with cockney working-class audiences.
Off-stage, she was a popular figure in London for her many charitable donations to the poor.
She died at her home London in ill health and mourned by masses.