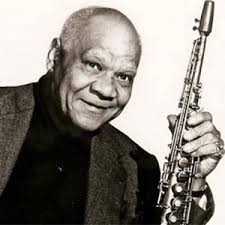 According to Internet sources given below, Sidney Bechet was born in New Orleans, just three years before his compatriot, Louis Armstrong. Sidney Bechet, who was of Creole ancestry, grew up in a middle class environment whereby his father and four brothers also played instruments. He left New Orleans for Chicago aged 19 and made his big break in 1919 when composer-conductor Will Marion Cook asked him to join his Southern Syncopated Orchestra for an engagement in London. Here Bechet came to the attention of the noted Swiss Conductor, Ernst Ansermet, who conducted the music of Igor Stravinsky for the Ballets Russa.
Sidney Bechet eventually became even better known as a virtuoso of the soprano saxophone. Much of his subsequent career was spent abroad, mainly in France where he died.
Personal remarks:
Sidney Bechet was my saxophone hero when getting into jazz in the early 1960s. In my vinyl collection I have Bechet, Riverside - RLP 149. On Side 1 - track 1, he plays an amazing (for me) Wildcat Blues (1923) version on his soprano saxophone, a performance rivaling that of Monty Sunshine.