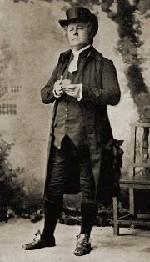 Rutland Barrington [George Rutland Fleet] was an English singer, actor, comedian and Edwardian musical comedy star born in Penge, England.
He was educated at Headley rectory, Surrey and at the Merchant Taylors' School in London. Initially employed at a bank he became an actor with the help of his aunt, activist and dramatic reader Emily Faithfull. He is remembered for originating the lyric baritone roles in the Gilbert and Sullivan operas from 1877 to 1896 Barrington then went into theatre management writing at least a dozen works for the stage as well as performing in music halls. His only recording is that of his The Moody Mariner (1905)
In later life wrote horse racing columns for Punch and also appeared in four silent films.
He died in St. James's Infirmary, Balham, in South London,